Thomas Jepson Gascoyne is probably the most successful rider ever associated with the club.

For a time he held the world record for either ½ mile or 1mile.

In 1923 the ‘Athletic News’, the ‘Sporting Chronicle’, and the ‘Wheelman’, plus four other unnamed papers covered his exploits throughout 1896 where he is compared to the great Zimmerman.

His world record time of 57mins 18.4 secs for the 25 mile cinder track’ easily broke the previous time of 59 mins 1.6 secs. This was his first attempt as previously 10 miles had been his longest distance.

The riders were paced by a triplet and a drawing at the top of a poster implies that he passed the triplet because it was not quick enough!

Title changed to Chesterfield Cycling and Athletics Club. The club then disappeared until 1923.

Athletics formed a large part of the activities and it organised the Derbyshire Times Road Walk.

There is a note that some members were lapsing into professionalism.

B.A.R. Trophy donated by J.A.Webster. Jimmy Webster owned a cycle shop at 282 Chatsworth Road, Chesterfield and he also made bikes. The photo shows a head tube badge with “Webby” at the top and the “Spire” in the centre.

A member of Monckton cycling club and professional BAR Winner 1938.

No club due to war.

Arthur Troth the club’s star rider was called up with the outbreak of war joining the Sherwood Foresters regiment. Rushed out to Singapore they arrived too late to stop the Japanese and went straight into a Prisoner of war camp. He then worked on the Burma death railway were he died and is reputed to be buried under a sleeper. 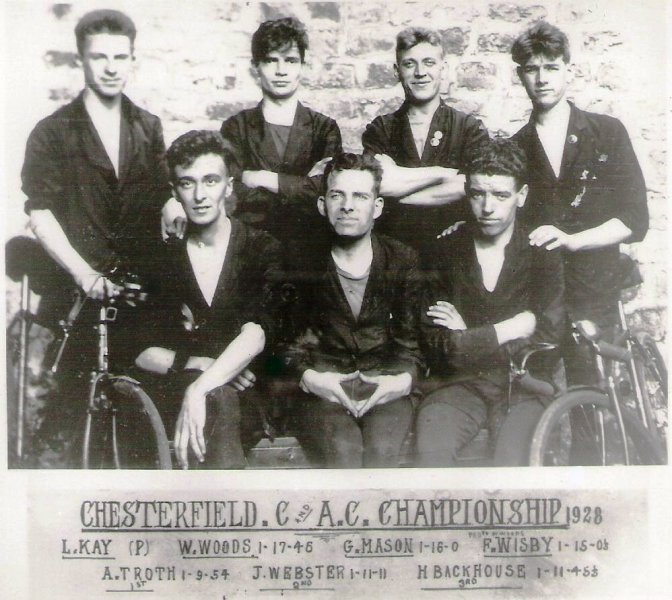 Jimmy Webster is centre front row and Arthur Troth is left front row. All are members of the Chesterfield Cycling and Athletics Club. The club later became the Chesterfield Spire Cycling Club – was that because the Webster badge had the “Spire” on its badge and Jimmy became secretary?

Stan George wins handicap in open 25. One 2nd and 3rd fastest and one handicap prizes were won in May. In June the ladies team of D Green, A Yates and E Bagshaw won team prizes in Doncaster Wheelers 10. Club wins both ladies and men’s road championships in Chesterfield Combine.

Mavis Elcock one of the notable athletic members is featured in the BBC programme “Spotlight on Sport”. Mick Platt wins 3rd in open 25. Dorothy Kent 3rd in Central ladies 25. Gordon Kent 2nd in Beacon Mountain Trial (one of the country’s top events).

Joe Bell won a cup in the North Mids. 100. Eight riders finished in the club 50 and all reasonably close in time. Somebody other than Alf Walker and Harry Bagshaw finished in the club 100. In some evening ten mile events there were as many  as 19 riders. Senior best all rounder, 1st H Bagshaw,2nd K Jones, 3rd A E Walker. Junior best all rounder 1st A Thompson, 2nd R Mountain, 3rd D Lee.