Choosing and Riding an E-Bike

I have been riding a road bike since my forties and I am now 72. I like to think I used to ride to a decent standard and could always keep up with the group. During that time I have had several very nice bikes which made riding a pleasure and that’s the point, I ride these days purely for pleasure. I no longer ride to inflict pain or ride through it. Those days are gone. I still enjoy riding to my limit but when the hills come my legs no longer appreciate “the burn” and my knees don’t like being stressed pushing hard up hills. What is worse, I am wiped out after a 40 mile hilly ride in the Peak District (my preferred location) and afterwards I can often struggle to walk up stairs. Plus, my knees hurt (osteoarthritis) and walking downhill the following day is difficult.

So two years ago I started to think about an e-bike. At that time many were very heavy and not what I called a decent road bike. Also, they were quite expensive if they were decent quality. I remembered the electric conversions that both Steve Bright and Mel Tooker had made to their road bikes and how much they liked them. I decided to modify my old steel Vernon Barker road bike. I used the same company in Stoke-on-Trent and went there to get advice. I decided on a rear wheel hub motor. I bought the kit and the biggest battery – 21aH they could sell me to ensure I got great range in the Peak District. The total kit and battery cost £900. The kit was relatively easy to fit but there were no instructions so you have to be a bit mechanical to understand how it fits together. The cables have waterproof male and female plugs and are colour coded, so connecting them is fairly straight forward. It is possible to route the cables with ties to make the fitment neat. However, there are a few caveats:

The result is a bike I still love to ride and if cost is an issue I can recommend this sort of conversion. Since fitting the kit, I had a problem with the motor and got a free replacement wheel but the company no longer sell this kit. The good news is that Amazon do and some of the kits are better than mine and are cheaper.

Because it is a rear wheel motor the steering is not heavy and has not suffered. There are only two downsides, the weight and the brakes. The bike now weighs about 21kg – the original bike weighed about 11kg. As it is a heavy bike, braking downhill was an issue especially in the wet. I bought a pair of TRP road brakes which were reviewed as better stopping power. After trying several brake blocks my bike now stops without too much drama. The extra weight means that you ride with more care; you cannot throw the bike around. I have also fitted 700×32 Schwalbe Marathon tyres with Slime filled tubes for comfort and puncture resistance. There are five levels of assistance on my kit and I rarely use more than the first level unless I’m tired or attempting a very steep hill such as Curbar Gap. The controller is fitted on the handlebars and I can see both the battery level and assistance level. Amazingly, I regularly get around 100 miles out of one charge.

I have ridden this bike for many miles with a smile on my face ignoring the many jibes about riding a motorbike. I no longer struggle to keep up with my fitter, stronger or younger companions and when a hill is suggested I no longer moan or dread it. I don’t always use my e-bike. I still use my normal bike but often alternate between the two depending on the proposed route. The e-bike is particularly great if you’ve been off the bike for longer than normal (injury, illness or holiday off the bike) and helps to quickly get your fitness back. It is also great into a stiff headwind. 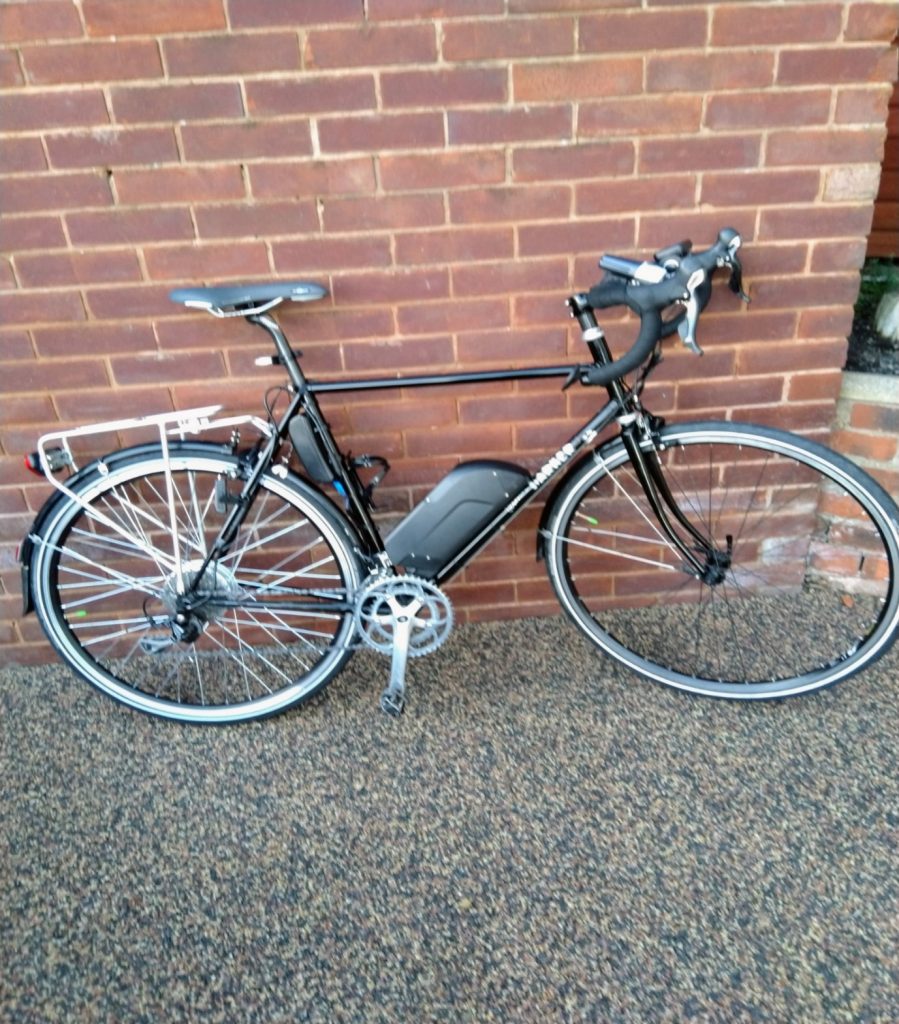 There is one thing to stress. E-bikes still need you to pedal to be given assistance. You can still get a good ride and put some work in on climbs, just don’t use the high power settings unless you really need to or just want a laugh!. You should always use the gears as normal and e-bikes work best at a reasonable cadence. Your riding style will adapt. It is still possible to ride slowly in a group, your legs and knees just don’t feel stressed. Your companions will quickly get fed up if you just fly off into the distance on every climb!

So why did I buy a second E-Bike?

In the two years since I converted my bike, the e-bike market has expanded in leaps and bounds. They have become much lighter and more like road bikes with some being very hard to be identified as an e-bike. I now see a lot more riders of a certain age on one. The newer bikes range in price from about £2500 to silly money for those with big pockets. However, I think it is the law of diminishing returns and £3500 will get you a very nice e-bike that rides just like a road bike.

Like all cyclists I kept looking at the new bikes and lusting after a few. Having said how much I like my Vernon Barker conversion I was finding it harder and harder to get on and off the bike and this was as a result of the extra weight. I have had hip surgery and my flexibility is poor so leaning the bike over and supporting the weight of it whilst throwing my leg over the saddle is becoming more difficult especially at the lunch stop and end of the ride.

So, after a LOT of reading reviews, visiting bike shops and borrowing an e-bike (an Orbea) for a 20 mile ride I took the plunge and opted for a Cube Hybrid which uses the Fazua integrated system. You can see a picture of my Cube on the website in Steve Bright’s article. Once again I love it and as it is only 14.5kg it is totally different and much easier and better to ride. I can throw this around and should the battery fail I am confident I could still pedal home.

Which motor system to choose?

I am basing my explanation on observations on my test of an Orbea e-bike two years ago which used the Ebikemotion system with a crossbar controller. I don’t know if the controller has changed in that time but I don’t think it has.

In my opinion, the controller operation is crucial to the ease of use. I prefer a controller on the handlebars rather than on the crossbar. I admit that the crossbar button is much neater but the handlebar controllers are only the size of the smallest Garmins. There are two things you need to know when riding an e-bike; what power level you are using and the amount of battery you have left. You can see both at the same time with a handlebar controller. You can only see one at once on the crossbar controller and you have to press the button to toggle between them. More importantly to me is the ability to change assistance levels both up and down. I regularly change between level one and no assistance when on undulating roads to save the battery. As the system only cuts out above 15mph, it is easy to be lazy and leave the assistance on when you really don’t need it.

When using the crossbar controller you are forced to go up through all the levels in order to get back to either no assistance or back to level one. I found I had to take my eyes fully off the road to look down at the button to see which colour (assistance level) I was in which I found dangerous. Admittedly, with more use I might have got more used to it but it did not strike me as good design.

If, like me, you are struggling to keep up with the group or just not enjoying your rides anymore or even struggling to cycle after illness or injury, do yourself a favour and consider an e-bike. They can be expensive but will keep you riding into old age (I have several friends in their 80’s who ride e-bikes. I feel as though my bikes give me the equivalent of at least 1KW of power in the lowest setting which doubles my output. In effect I feel as strong as I did 20 years ago.

Finally, the reviews often show fit reviewers seeing how fast they can go up steep hills on full power. This is very annoying as usually you are not going to ride like this. Don’t be fooled by those reviews. I recommend trying before you buy if you can. A good bike shop should give you good advice and have a demo model for you to try. I know there are several club members with e-bikes. Talk to them and ask their opinions.

Happy riding and let’s hope next summer we can get back to normal social rides.